Addiction is a psychological disorder characterised by an inability to stop engaging in certain behaviours or consuming certain substances despite negative consequences. A Level psychology looks at the following aspects of addiction:

The three main symptoms that describe addiction are:

These symptoms differ depending on whether the addiction is to a substance (e.g. nicotine) or behaviour (e.g. gambling).

Dependence can be physical and/or psychological:

Tolerance is when a person’s response to a drug reduces such that they need higher and higher doses to achieve the same effect. 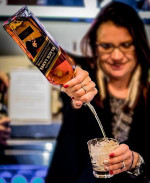 Tolerance occurs because the body adjusts to use of the drug in order to maintain homeostasis (feeling and functioning normally). For example, drinking alcohol disrupts the brain’s normal functioning and so the brain reacts to bring things back to normal and achieve homeostasis. This creates a new ‘normal’ and so the person then has to drink more next time in order to get the same buzz as before.

Tolerance to one drug often creates increased tolerance to other drugs. For example, smoking cigarettes (nicotine) increases tolerance to caffeine because caffeine and nicotine have similar effects in the body. This is known as cross-tolerance.

Withdrawal syndrome is when a person develops unpleasant symptoms upon stopping or reducing drug use. These may include pain, anxiety, depression, insomnia, and shaking.

The extent of withdrawal syndrome depends on which drug the person is addicted to (e.g. heroin withdrawal is typically more severe then nicotine), how much they use (typically, the greater quantity of drugs a person uses, the worse the withdrawal), and how frequently they use it (e.g. regular use at the same time of day will typically cause worse withdrawal than sporadic use).

Risk factors are things that increase the likelihood of addiction. These include:

Evidence suggests there is a genetic component to addiction. For example:

However, it’s impossible for addiction to be 100% genetic. A person with a genetic predisposition towards heroin addiction, for example, can’t become addicted to heroin if they never encounter the drug in the first place. So, genetic vulnerability must interact with environment to cause addiction.

Stress is a risk factor for addiction – both in the short term and historically.

Further, historical stress – particularly during childhood – is also a risk factor for addiction. For example, Andersen and Teicher (2009) describe how stress during childhood and adolescence (a ‘sensitive period’) affects brain development, making a person more vulnerable to addiction in adulthood. Another example is Epstein et al (1998), who found that sexual abuse in childhood meant women were twice as likely to develop alcohol addiction as adults.

AO3 evaluation points: Stress as a risk factor for addiction

Certain personality traits appear to be risk factors for developing addiction – although whether there is such a thing as an ‘addictive personality’ is disputed by many psychologists.

Another theory linking personality and addiction is Cloninger’s (1987) tri-dimensional theory. According to this theory, there are three key personality traits: Response to danger, novelty seeking, and reward dependence. Using this framework, Cloninger argues that addicts typically display the following patterns:

AO3 evaluation points: Personality as a risk factor for addiction

Family influence is another risk factor for addiction. It can be explained in several ways.

According to social learning theory, people learn and imitate behaviours of role models they identify with. Assuming this theory is correct, it would go a long way to explaining addiction. For example, a child may identify with their cigarette-smoking father (role model) and observe the reward (pleasure/stress relief) he gets from smoking. This provides vicarious reinforcement of cigarette-smoking behaviour, which makes the child more likely to try cigarettes and become addicted.

Another explanation of family influence on addiction is perceived parental approval. If a child perceives that their parents have a positive (or at least neutral) attitude towards a drug, this makes them more likely to try and become addicted to that drug. For example, Livingston et al (2010) found that children whose parents allowed them to drink alcohol in their final year of high school were more likely to drink heavily the next year at college.

Like family, peer influence may also increase the likelihood that a person develops an addiction.

For example, if a person’s friendship group all starts smoking cigarettes, it makes that person more likely to try smoking and become addicted to cigarettes. Their friends may offer them cigarettes, or the person may feel left out if all their friends are smoking and they’re not.

Again, social learning theory can be applied here: If someone identifies with their friend, sees them smoke cigarettes and be rewarded for that behaviour (e.g. others think it’s cool), this provides vicarious reinforcement of that behaviour, making them more likely to imitate it. 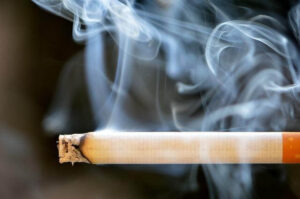 Nicotine addiction can be explained via neurochemistry. In particular, nicotine manipulates the brain’s reward system via the neurotransmitter dopamine. A summary of this process (the dopamine desensitisation hypothesis) is as follows:

This stimulation of the dopamine system is known as the common reward pathway.

Further neurochemical explanation of nicotine addiction can be found in the nicotine regulation model. According to this model, prolonged periods without nicotine causes nAChRs receptors to become resensitised to nicotine (upregulation). This state of having many nAChRs receptors that are available but not stimulated causes withdrawal symptoms such as anxiety. Smoking alleviates these withdrawal symptoms and reinforces the behaviour.

The nicotine regulation model explains why smokers find the first cigarette of the day to be the most satisfying: During sleep, nAChRs receptors are upregulated and become more sensitive, resulting in a greater dopamine release when smoking resumes.

One way learning theory can explain nicotine addiction is via operant conditioning. Smoking behaviour is reinforced both positively and negatively:

The pleasant sensations of smoking can also become associated with cues in the environment via classical conditioning. For example, if a person regularly smokes cigarettes when they’re in a pub, then they may condition themself to associate pubs with smoking. Once this association is learned, going to the pub may trigger an urge to smoke cigarettes. This is known as cue reactivity. 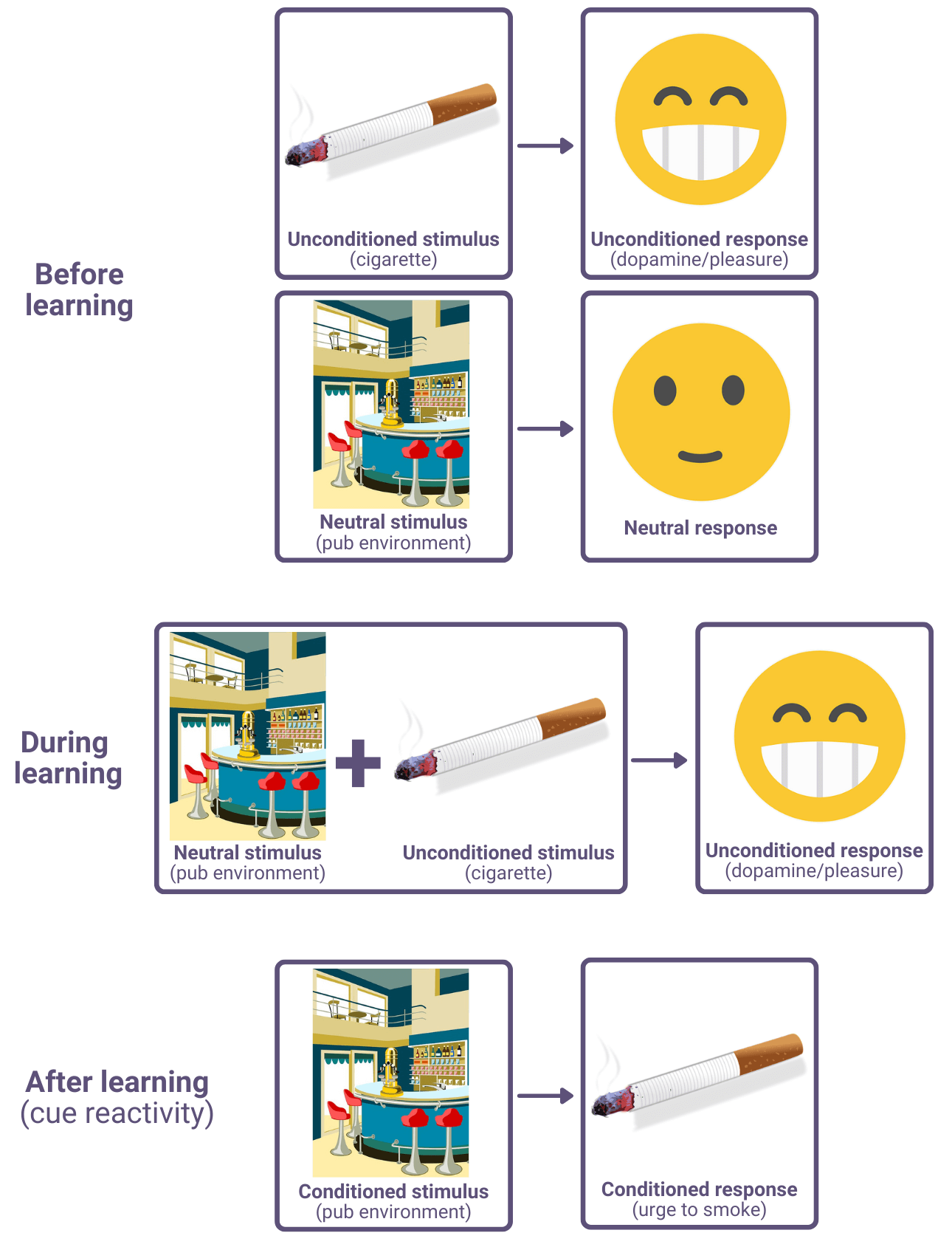 Learning theory explanations of nicotine addiction may also include social learning, such as the peer pressure example described above. 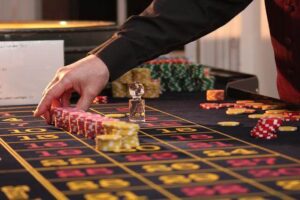 Addiction is typically associated with substances (such as nicotine) that have biological effects in the body. However, people can also get addicted to certain behaviours, such as gambling. Because these behaviours don’t directly cause biological effects in the same way as addictive substances, explanations of gambling addiction tend to be more psychological than biological. The syllabus lists two such examples: Learning theory and cognitive explanations.

The positive reinforcement of gambling is obvious: Winning money. Other factors, such as the lights and sounds of the machines, the social aspect of a casino/betting shop, and the excitement and anticipation of a gamble provide further positive reinforcement. This makes the person more likely to repeat the behaviour.

But gamblers typically lose more money than they win. These losses should serve as negative reinforcement that makes the person less likely to repeat the behaviour. So why do people get addicted to gambling?

The answer is to do with the schedule of reinforcement. Skinner’s research on rats and pigeons found that schedule was important for creating lasting behavioural change via operant conditioning:

The same principle applies to gambling addiction. The unpredictability of wins means gambling behaviour is maintained even after successive losses. The gambler thinks “maybe next time I will get a big win”.

Gambling businesses (e.g. casinos, slot machine manufacturers) can use different formulas for partial reinforcement schedules. A slot machine with a fixed ratio, for example, pays out every x spins (or every x minutes). But this is often too predictable, so slot machines typically pay out according to variable ratios:

Variable ratios are typically the most addictive (and most profitable). Again, when the rewards are unpredictable, the gambler thinks “maybe next time”. These thoughts and the gambling behaviour are reinforced with occasional wins, leading to addiction.

Cognitive explanations of gambling focus on the thought processes of addicts. Gambling addicts are prone to several cognitive biases, such as:

According to cognitive explanations, such irrational thought processes cause and sustain gambling addiction.

There are many different treatments to help reduce addiction, including drug therapy, behavioural approaches, cognitive behavioural therapy, and application of theories such as planned behaviour and Prochaska’s six-stage model. The most effective approach to reducing addiction will depend on what the patient is addicted to and what stage of recovery they’re at.

Commonly-used drug therapies for nicotine addiction include nicotine patches, nicotine gum, and nicotine inhalers. These work as agonists by binding to the same receptors (nAChRs) and causing similar effects (e.g. dopamine release). This reduces the withdrawal symptoms when an addict stops smoking.

Although gambling addiction is not an addiction to a biological substance, drug therapy can still be effective. Gambling activates similar dopamine-related reward pathways to heroin and other drugs, so antagonists such as naltrexone may reduce the desire to gamble. However, it is not officially approved for this use.

Behavioural interventions use behaviourist principles to treat addiction. Aversion therapy and covert sensitisation use classical conditioning to create negative associations with the addictive substance or behaviour. 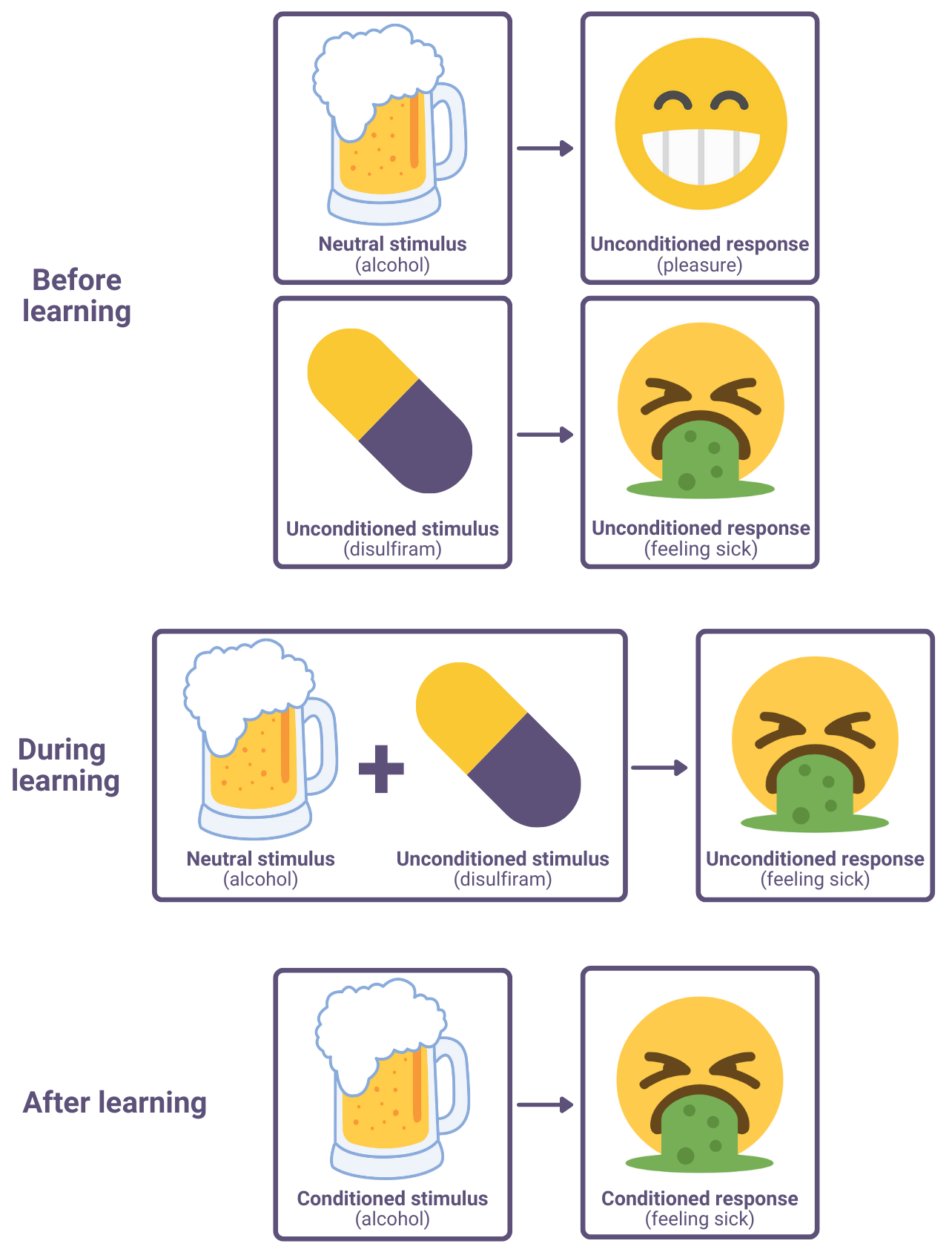 In addition to emetics (drugs that induce sickness), there are numerous other ways to create negative associations with an addictive substance. For example, researchers have used electric shocks in attempt to treat gambling addiction. And a commonly-used aversion therapy technique for nicotine addiction was to get subjects to rapidly smoke cigarettes one after another, which causes feelings of sickness. The idea with all these methods is to create negative associations with the addictive substance, which should reduce addiction.

Covert sensitisation also operates on the behaviourist principle of classical conditioning but uses imagination rather than real-life unpleasant stimuli. 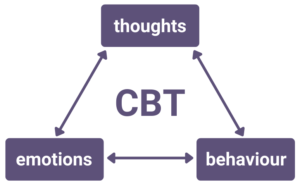 Cognitive behavioural therapy (CBT) involves identifying and challenging the thought processes of addiction. This can be broken down into a cognitive component (functional analysis) and a behavioural component (skills training).

With functional analysis, the CBT therapist may get the patient to describe what they think before, during, and after indulging their addiction. The therapist will then help the patient challenge any irrational and maladaptive thought processes during this sequence.

For example, in the case of gambling addiction, the patient may tell themself “I’ll stop when I win back what I’ve lost”. The therapist could then get the patient to reflect on and challenge such thoughts and how they make the situation worse.

The behavioural component of CBT involves helping the patient develop skills to deal with situations that might trigger relapse. For example:

Psychologists have developed theories of behaviour change, such as planned behaviour and Prochaska’s six-stage model, that can be applied to addicts to reduce addiction. The idea is that tailoring treatments for each person according to these models will increase the likelihood of behavioural change and reduce their addiction.

Building on earlier work (the theory of reasoned action), Ajzen (1991) developed the theory of planned behaviour. According to this theory, changing addictive behaviour is all about intention, which is determined by three factors:

The theory of planned behaviour predicts that the greater the level of intention, the more likely that person is to give up their addiction.

Behavioural change does not happen instantly. Instead, Prochaska and DiClemente (1983) outline a six-stage model that describes the various steps that occur between addiction and rehabilitation. The idea is that tailoring intervention to each stage of this model increases the likelihood of behavioural change.

A recovering addict will not necessarily go through these steps in a linear fashion. For example, many people relapse after the maintenance phase and return to e.g. the contemplation or preparation stages. The six-stage model acknowledges relapse as part of the process of behavioural change rather than a failure.