This A level psychology topic looks at several theories and explanations of how infants learn and develop their mental abilities, including: 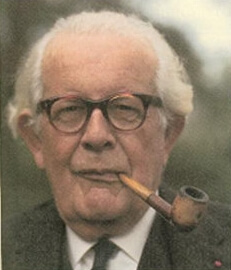 Piaget’s theory says humans are born with innate (biological) abilities and that cognitive development occurs through a combination of these abilities and environmental interactions (in particular interactions with physical objects).

If you remember from the approaches topic, schema are cognitive frameworks/mental models/ways of organising information and understanding the world. Piaget’s theory explains children’s cognitive development in terms of continually challenging and updating these schema through interacting with the environment.

Initially, children are born with very basic schema (e.g. the basic reflex to suck things). These basic schema serve as a foundation from which the child can interact with the environment and learn new things. Over time, the child will develop new schema (e.g. about people, objects, and themselves) and update their existing schema. This process of developing schema process continues all through a person’s life but is most notable within the first 15 years.

According to Piaget’s theory, development of schema involves:

Equilibrium is when an experience fits within the child’s existing schema (i.e. the experience is in line with the child’s expectations). This is a pleasant and desirable state because it means the child understands the world around them.

When a new experience fits with existing schema, it is assimilated into that schema.

For example, a child might develop the gender schema that women have long hair. If the child meets a new woman and she has long hair, the child can include/assimilate this new person within their existing schema of ‘woman’.

Disequilibrium is when an experience does not fit within the child’s existing schema. This is an unpleasant state because it means the child does not understand what is going on, causing confusion. This unpleasant feeling creates a motivation to learn and return to the pleasant state of equilibrium.

For example, if a child has developed the gender schema that women have long hair but then meets a woman with short hair, this causes disequilibrium. The child can accommodate this new experience and return to equilibrium by updating their schema of ‘woman’ to include people with short hair.

Piaget observed that children of similar ages would give similar wrong answers to certain questions. Piaget also observed that children would learn to give the right answers at similar ages too, suggesting intellectual development occurs in a series of stages. These stages were observed cross culturally, suggesting intellectual development is primarily controlled by genetics and biology rather than culture.

Based on these observations, Piaget proposed questions is characteristic of 4 stages of intellectual development:

The sensorimotor stage of intellectual development occurs from birth to age 2 and is primarily concerned with the physical world and body movement.

During this stage, babies develop object permanence (an understanding that objects still exist even when they are out of view). This is illustrated by the observation that before ~8 months of age babies switch focus from an object as soon as they can no longer see it. But from around 8 months, babies will look for an object when they can no longer see it, suggesting they understand that it continues to exist.

In the pre-operational stage, thinking is still characterised by egocentrism (the child can only see things from their own perspective and can’t understand the perspective of other people). For example, Piaget and Inhelder’s (1956) 3 mountains task let children examine a model of a Swiss mountain on a table. A doll was placed on top of one of the model mountains and the children were asked to select pictures of what the doll could see. However, the 4 year olds would consistently select the pictures of what they saw (not the doll), which suggests the children were unable to visualise things from another person’s perspective. 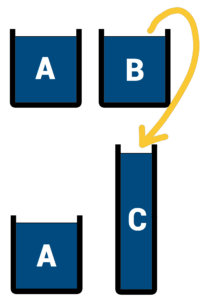 During the pre-operational stage, the child has not mastered conservation (the understanding that changing the appearance of an object does not change its mass or quantity or volume). For example, Piaget (1952) conducted an experiment where 7 year olds were shown two equal beakers of water: A and B. The children could see that A and B contained the same amount of water. But when the water from B was poured into a taller, thinner, beaker (C), the children thought beaker C contained more water.

Children in the pre-operational stage have not developed class inclusion (the understanding that things can be sub-sets of other things) either. For example, Piaget and Inhelder (1956) showed children a picture with 5 dogs and 2 cats and then asked: “Are there more dogs or more animals?”. The children would answer that there are more dogs, because they are unable to comprehend that each dog was a member of the dog class and the animal class.

The concrete operational stage occurs between 7 years – 11 years of age. Operations, here, are the use of schema to perform mental actions, such as logical reasoning.

Conservation is an example of an operation. In the concrete operations stage, children understand conservation and so are able to correctly identify that, for example, beaker C in Piaget’s example above contains as much water as beaker A despite its different appearance. 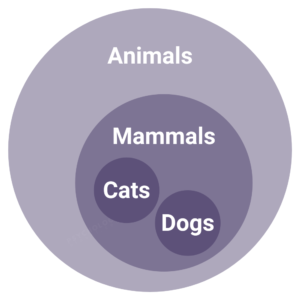 Egocentrism also declines during the concrete operational stage in a process called decentering. The child learns to be able to imagine things from the perspective of someone else other than themself. So, in the 3 mountains task above, children in the concrete operational stage are able to select photos from the doll’s perspective and not just their own.

For example, children in the formal operational stage could use abstract reasoning to arrive at the correct answer – 10 – for the following question:

By contrast, children in the earlier concrete operational stage get hung up on specific (concrete) facts, like how dogs don’t have 10 legs and can’t fly. 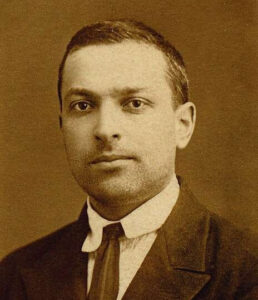 Like Piaget, Vygotsky’s theory describes how interactions with the environment explain cognitive development. But where Piaget emphasised interactions with physical objects, Vygotsky emphasises social and cultural factors (e.g. interaction with parents, teachers, and other children). For Vygotsky, learning is first intermental (between two people) and then made intramental (internalised within the individual).

Vygotsky’s theory is concerned with how these higher mental functions develop through social interactions.

Language is an example of a higher mental function and one that is crucial for cognitive development. According to Vygotsky, language develops according to the following timeline:

Vygotsky conducted experiments where he gave children of different ages objects with symbols on them and observed how they tried to work out what the symbols meant. Based on these experiments, Vygotsky argued that children develop concept formation according to the following sequence:

There is some overlap with Piaget’s stages of development here. For example, Vygotsky’s mature concept stage is somewhat similar to Piaget’s formal operational stage.

One way a teacher can help a child progress through the zone of proximal development is via scaffolding.

Scaffolding is when a teacher (e.g. a parent or older sibling) helps an infant to learn by providing a framework – a scaffold – to help them solve a problem or complete a task. As the infant progresses, the scaffolding is gradually removed until the infant is capable of completing the task by itself. 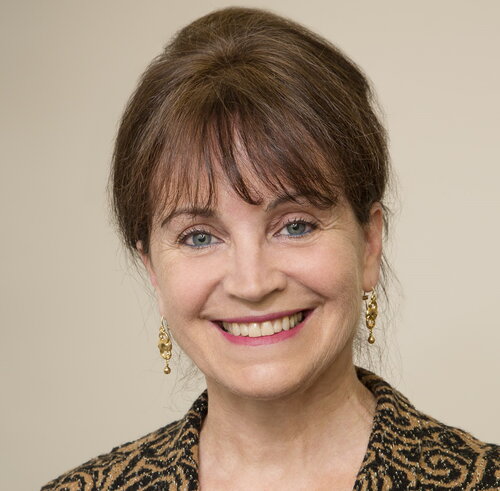 Baillargeon’s explanation of early infant abilities challenges Piaget’s stages of development – in particular his claim that infants develop object permanence at around 8 months old. Instead, Baillargeon argues that:

Baillargeon challenges Piaget’s claim that babies develop object permanence (the idea that objects still exist even when you’re not looking at them) at around 8 months old. Instead, Baillargeon argues that babies have a physical reasoning system that is present from birth.

Piaget’s evidence that babies only develop object permanence at 8 months is that before 8 months of age babies stop focusing on an object as soon as it is out of view but after 8 months babies will look for an object when they can no longer see it. However, Bailargeon argues that the only reason babies don’t look for objects prior to 8 months of age is that they lack the motor abilities to do so – not because they lack object permanence.

Baillargeon and colleagues have conducted several studies using the violation of expectation procedure to demonstrate that infants under 8 months of age possess knowledge of the physical world.

One example of this is Baillargeon and Graber (1987). In this study, infants aged between 5 months and 6 months were shown a rabbit travelling along a track and disappearing behind a wall with a hole in it:

You would expect to see the tall rabbit’s head and ears over the top of the wall but scenario 2 (the impossible event) violates expectations.

This suggests that the infants (all less than 6 months old) expected the tall rabbit to appear in the gap in the wall and were surprised when it didn’t, which suggests they had an understanding of object permanence. This contradicts Piaget’s claim that infants do not understand object permanence before 8 months of age.

Social cognition is a person’s understanding of themself as an individual in the context of society and other people (e.g. the competing demands of what you want and what other people and society in general may want). 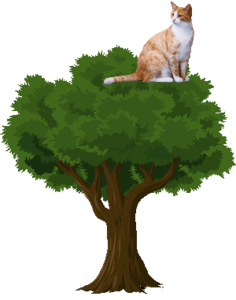 Selman (1980) studied how perspective-taking develops in children over time. He did this was by describing scenarios to children and studying their responses. One such scenario was as follows:

Based on their answers, Selman (1980) identified 5 levels of perspective-taking (also called role-taking theory):

Strengths of Selman’s levels of perspective taking as an explanation of social cognition:

Weaknesses of Selman’s levels of perspective taking as an explanation of social cognition:

Theory of mind is not a psychological theory like, for example, Piaget’s or Vygotsky’s. Instead, it refers to our ability to imagine and model the mental states of other people’s minds. 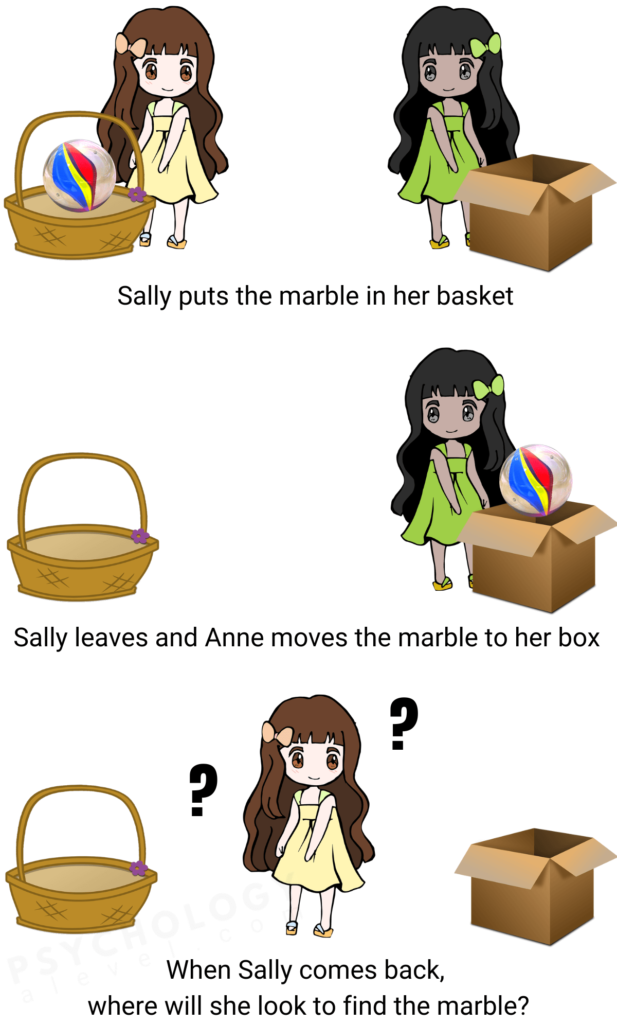 The Sally-Anne test is a way to test a person’s theory of mind.

The correct answer is that Sally will look in her basket for the marble. This is because Sally won’t have seen Anne move the marble into her box and so will have the false belief that it is still in her basket. It requires theory of mind to put yourself in Anne’s position and understand that she will have a false belief based on the information available to her.

Theory of mind as an explanation of autism

Baron-Cohen et al (1985) devised the Sally-Anne test and used it to conduct a quasi experiment on 3 groups of participants:

The children were asked several questions, such as “where was the marble in the beginning?” (the memory question) and “where is the marble really?” (the reality question). All children in the study answered these questions correctly. But when asked the theory of mind question – “where will Sally look to find the marble?” – the results were as follows:

Autism is a developmental disorder characterised by difficulties with social cognition, such as difficulties interacting and communicating with other people. The findings of this study suggest these difficulties are caused – at least in part – by problems with theory of mind. People with autism may be unable to understand the minds of other people, such as what Sally will be thinking in the Sally-Anne test. This lack of theory of mind is sometimes called mind-blindness.

Strengths of theory of mind as an explanation of social cognition:

Weaknesses of theory of mind as an explanation of social cognition:

For example, Rizzolatti et al (1996) observed that, in monkeys, the same areas of the brain activated when the monkeys reached for food as when they watched someone else reach for food. This is one of the earliest studies demonstrating the existence of mirror neurons.

Mirror neurons may be the biological basis of social cognition, enabling us to empathise with others, which would help inform our theory of mind and perspective-taking.

Strengths of the mirror neuron system as an explanation of social cognition:

Weaknesses of the mirror neuron system as an explanation of social cognition: