Overview – Issues and debates in psychology

This topic looks at the following issues within psychology:

This topic also looks at the following debates within psychology (and applies them to other areas of the psychology a level course):

The different approaches in psychology often come down on one side or the other in each of these debates. For example, the humanistic approach believes in free will whereas the biological approach is highly deterministic. These debates also feed into the other issues and options topics that follow.

Gender and culture in psychology

Gender bias within psychology may lead to false conclusions about men and women. This can happen in two directions:

Psychology aims to find universal truths about human behaviour. However, cultural bias often means the findings of a study only apply to the culture they were conducted in.

Cultural bias within psychology can lead to ethnocentrism: A perspective where the behaviours of a certain ethnicity or culture are seen as the default and normal. As such, any behaviour that deviates from the norms of that culture may be seen as abnormal.

For example, Ainsworth’s studies of infant attachment only looked at American infants and concluded that secure attachment styles are most psychologically healthy. From this perspective, child-rearing practices in other countries may be seen as unhealthy or abnormal rather than simply different. For example, the American perspective might see German parents as cold and rejecting. But from the German perspective, American parents may seem overly coddling, preventing the child from becoming independent.

Psychological research can avoid cultural bias by being conscious of cultural relativism, i.e. differences between cultures.

Socially sensitive research is research that has ethical implications for people beyond the researchers and participants directly involved. Examples of this include:

Sieber and Stanley (1988) outlines various ethical concerns that researchers should consider before conducting socially sensitive research. These include:

Researchers must weigh up these concerns against the potential benefits. In some cases, psychologists argue that even if a study causes harm it should still be conducted because the knowledge gained is so valuable (e.g. Milgram).

The following are examples of socially sensitive research studies and ethical implications:

Free will vs. determinism

Determinism is the rejection of free will. There are various different forms of determinism, including:

Environmental determinism (i.e. the behaviourist approach) is the view that behaviours are determined by conditioning from our environment. Examples of such conditioning include:

Psychic determinism (i.e. the psychodynamic approach) is the view that behaviours are governed by unconscious desires and conflicts. Examples include:

Strengths of free will/weaknesses of determinism:

Weaknesses of free will/strengths of determinism:

Soft determinism could represent an in-between approach to the free will vs. determinism debate. For example, Bandura’s social learning theory has elements of both: Although we often imitate the behaviours of our environment (environmental determinism), one could argue that mediating processes (e.g. attention and motivation) represent an opportunity for free will to play a part. In other words, we can choose which behaviours we pay attention to and choose to reflect on whether we are motivated to reproduce them and why.

Twin studies provide a way to assess the heritability of behaviour. Monozygotic twins have identical genetics and so, if nativism was 100% correct, you would expect them to behave identically too. However, monozygotic twins often have different personalities and preferences, suggesting environment plays a role in behaviour too.

The biological approach to psychology can be said to support the nature side of the debate. For example, the studies above suggest genetics play an important role in various behaviours and psychological traits.

At the other extreme, empiricists believe humans are born as blank slates with no innate nature. So, because humans don’t come with any pre-programmed traits or nature, any behaviour must be learned from the environment.

The learning approach to psychology leans towards the nurture side of the debate. Skinner, for example, explained behaviours as a result of operant conditioning and so different conditioning leads to different behaviour (regardless of genetics). For example, if someone who learned to do their homework because of positive reinforcement did not receive that positive reinforcement, then they would have behaved differently (i.e. not done their homework).

The interactionist approach lies somewhere between the two: Our genetic nature predisposes us towards some behaviours more than others, but how these genes are expressed is often dependent on environment. This goes back to the difference between genotype and phenotype.

There are several examples of this elsewhere in the course. For example, OCD has a strong genetic component but not everyone with these genes goes on to develop OCD. For example, some people may take drugs that suppress OCD symptoms, others may overcome OCD with cognitive behavioural therapy, and some people with a genetic disposition towards OCD may simply never experience events that trigger OCD symptoms. And although twin studies support the existence of a genetic component to OCD, the heritability coefficient is less than 0.7; there are many instances where just one twin develops OCD but not the other.

One mechanism through which environment interacts with genetics is epigenetics. Lifestyle choices (e.g. smoking) and environmental effects (e.g. living in an area with air pollution) ‘switch on’ certain genes and ‘switch off’ others. Although epigenetic effects do not alter a person’s DNA sequence itself, there is some evidence they can alter the genes they pass on to their children.

Realistically, psychologists on both sides of the nature vs. nurture debate are interactionists – it’s clear that both genetics and environment have effects on behaviour. The debate, then, is to what extent nature determines behaviour and to what extent nurture does.

Strengths of nativism/weaknesses of empiricism:

Weaknesses of nativism/strengths of empiricism:

The holism vs. reductionism debate is about levels of explanation: Whether psychology should seek to understand a person’s behaviour as a whole or whether behaviours can be broken down and explained in terms of smaller parts. 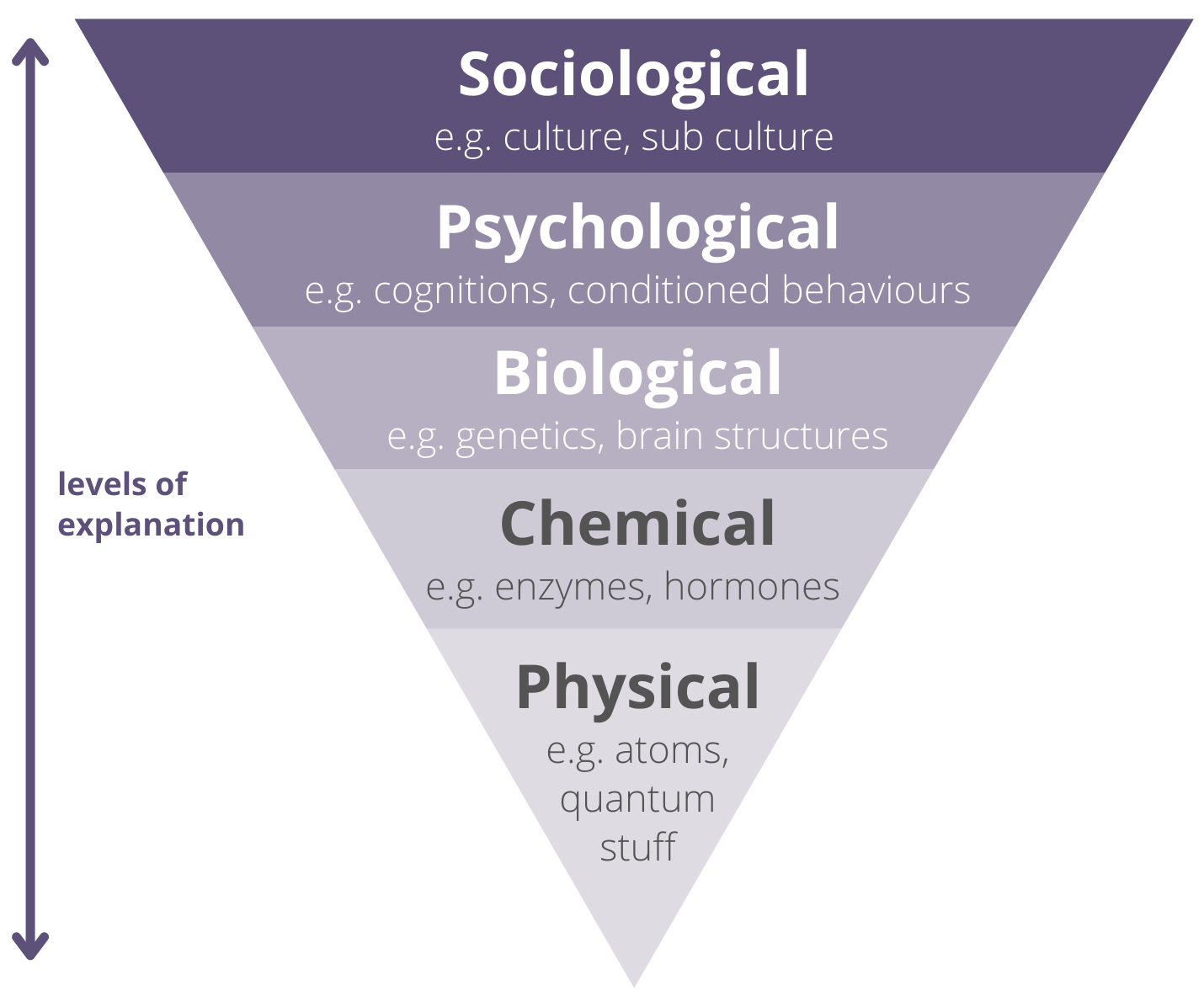 The same phenomena can be explained at different levels. For example, the phenomena of depression:

The biological approach to psychology leans heavily towards reductionism (biological reductionism). For example, a proponent of this approach might argue that behaviour can be explained entirely in terms of physical/biological causes without reference to higher levels of explanation, such as a person’s upbringing or cognitions.

Similarly, the behaviourist approach can be reductionist (environmental reductionism). For example, an extreme behaviourist might explain behaviour solely in terms of conditioning without reference to lower levels of explanation such as the underlying biology.

Holistic approaches look at the person as a whole to explain their behaviour. For example, a holistic explanation of depression will consider the person’s genetics and biology but also their experiences, upbringing, and the general social context and culture in which they live. Advocates of holism believe human behaviour is too complex to be fully explained from one level of explanation and that “the whole is greater than the sum of its parts”.

Again, you don’t have to dogmatically come down on either the reductionist or the holism side but can instead opt for an in-between approach. For example, you could argue that in some situations several levels of explanation are best and in others a single level is best. You could argue there is no one-size-fits-all answer as both holism and reductionism are useful for different things.

Strengths of reductionism/weaknesses of holism:

Weaknesses of reductionism/strengths of holism:

The nomothetic vs. idiographic debate is about whether the best approach to psychology is to look at similarities between humans or the differences that make them unique.

The nomothetic approach (‘nomos’ = ‘law’) to psychology seeks to identify general laws of human behaviour by looking at similarities between people and groups of people.

Classifications are a form of nomothetic generalisation. For example, the American Psychiatric Association’s Diagnostic and Statistical Manual of Mental Disorders provides ways to categorise people as having mental disorders such as depression, anxiety, personality disorders, etc. Similarly, several nomothetic ways to categorise personality types exist such as the five-factor model of personality, the Myers-Briggs type indicator, and astrological star signs.

Principles are another form of nomothetic generalisation. For example, behaviourism describes general laws through which behaviours are conditioned, such as operant and classical conditioning. Similarly, cognitive approaches try to develop theoretical models that explain human behaviour.

Characteristics of the nomothetic approach:

Characteristics of the idiographic approach: