This A Level psychology topic looks at the psychology underlying romantic relationships, including:

Evolution is the process by which species adapt to their environment. Over time, random mutations in genes that are advantageous to the animal become more widespread. This can occur in two ways:

These differences between male and female sex cells give rise to different reproductive behaviours:

Human anisogamy means that the optimal breeding strategy differs between men and women (from an evolutionary standpoint of passing on genes). In general, the optimal strategies are:

These two strategies conflict with each other, which results in different reproductive behaviours between men and women.

Men can produce children with very little investment of time and resources – they just need to have sex. For a man, getting as many women pregnant as possible produces the most amount of his children, which increases the amount of his genes that survive. There are several strategies males may use to achieve this:

Each child is a significant investment of time and resources for a woman (e.g. she has to carry the baby for 9 months in her womb). This results in a different optimal strategy for ensuring the survival of her genes compared to men. Rather than trying to have as many children as possible, women focus more on ensuring the children they do have are healthy and provided-for. There are several strategies females may use to achieve this:

The characterisations of male and female reproductive behaviours above are extreme generalisations. There are obvious exceptions, e.g. highly monogamous men and highly promiscuous women.

Attraction is a key part of romantic relationships. There are several factors that affect attraction such as physical attractiveness, similarity of attitudes, and self-disclosure.

Self-disclosure is when you reveal personal and intimate information about yourself to another person. This creates feelings of intimacy and trust in relationships. 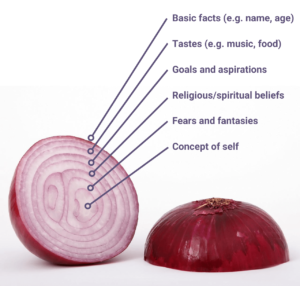 Initially, disclosures will cover a narrow range of basic topics in a shallow way – you talk about what you do for a living, your hobbies, etc. As the relationship develops, the breadth of topics and depth of disclosure increases. For example, you talk about more controversial or intimate topics, share painful or embarrassing memories, and maybe reveal some secrets. Altman and Taylor liken this process to peeling away the layers of an onion: You start at the surface and peel away until you get to the core of the person.

Self-disclosure is important in the development of a relationship as it establishes trust and intimacy. However, too much self-disclosure too quickly tends to have the opposite effect: Altman and Taylor found that revealing intimate details too early on (e.g. talking about childhood trauma on a first date) is unattractive.

Physical attractiveness is often the first part of attraction. Getting to know someone’s personality and values takes time, but physical characteristics provide an immediate way to select potential partners.

We covered some evolutionary explanations of physical attractiveness above. According to this explanation, men are attracted to physical characteristics that indicate fertility in females, such as youth and a low waist-to-hip ratio. Although physical attractiveness in partners seems less important to women than men, women are also attracted to physical features that indicate genetic fitness, such as high shoulder-to-hip ratio.

A common physical attribute attractive to both males and females is facial symmetry. Shackelford and Larsen (1997) found that people with symmetrical faces are consistently rated as more attractive than people with asymmetric faces. The evolutionary explanation of this is that symmetry is a reliable indicator of fitness because it requires genetic precision and an environment of abundance during development.

Walster et al’s (1966) matching hypothesis says that we choose partners who are similar in physical attractiveness to ourselves. For example, if you rate yourself 7/10, you’ll go for a partner who is also 7/10.

There is an evolutionary element to the matching hypothesis. While it might be desirable to form relationships with the most attractive people, it is not always realistic. If people only went for partners out of their league, they might never find a partner and thus never pass on their genes. So, people assess their own attractiveness and seek out partners who ‘match’ their own level of attractiveness to increase their chances of relationship success.

Kerckhoff and Davis’ (1962) filter theory says that we select partners by narrowing down the available options using 3 filters:

There are three theories of relationships listed on the syllabus: Social exchange theory, equity theory and Rusbult’s investment model. The syllabus also lists Duck’s phase model, which is a theory of relationship breakdown.

Social exchange theory is the name for a range of theories that view romantic relationships economically in terms of costs vs. benefits. 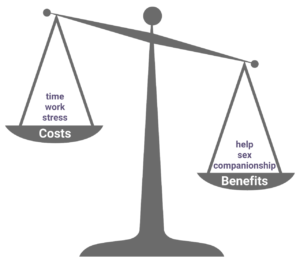 Thibaut and Kelley (1959) proposed the following model of the various stages of a relationship according to social exchange theory:

The equity theory of romantic relationships is about fairness between the partners.

According to equity theory, relationships are successful if each partner equally bears the same amount of costs and benefits. If one partner is benefiting from the relationship more than the other, this is seen as unfair and leads to relationship dissatisfaction on both sides: The underbenefiting partner may feel angry that they are making all this effort and getting little in return, whereas the overbenefiting partner may feel shame and guilt. So, whereas social exchange theory sees people as selfishly trying to maximise their own benefits in a relationship, equity theory sees people as trying to maximise equity (fairness).

Rusbult’s (1980, 1983) investment model of relationships includes elements of social exchange theory but also considers each partner’s investment in the relationship.

According to Rusbult’s investment model, commitment in a relationship is dependent on three factors:

According to Duck’s phase model, relationship breakdown is not a one-off event but a process that happens in four stages. Each stage marks a ‘threshold’ at which point the perception of the relationship changes. If the partner does not feel there has been enough change, they may cross the threshold of the next stage, increasing the likelihood of a break-up.

Virtual relationships are relationships between people who are connected virtually rather than physically. The internet – social media in particular – enables people to form these relationships, which differ from ordinary physical relationships in terms of self-disclosure and the absence of gating.

Differences between virtual and face-to-face communication may lead to greater levels of self-disclosure in virtual relationships than in face-to-face interactions.

Unlike face-to-face interactions, many forms of virtual communication (e.g. direct messaging, email) do not include cues such as body language and tone of voice. This may lead to increased self-disclosure.

Sproull and Kiesler (1986) proposed that the reduction in non-verbal cues from virtual interactions may make individuals less likely to self-disclose. However, Walter’s (1996) hyperpersonal model suggests the opposite: Non-verbal cues distract from the content of the communication and so removing them in virtual contexts enables the sender to focus more on how they present themselves, enabling superior (‘hyperpersonal’) communication. The hyperpersonal model is further supported by Jiang et al (2010), who found that disclosure and intimacy were higher in text-based virtual interactions than in face-to-face ones.

Another difference between virtual and face-to-face interactions is the absence of gating. This means that factors that might have prevented a relationship forming in real life (i.e. gates to that relationship) are not present in the virtual context.

McKenna and Bargh (1999) give several examples of potential ‘gates’ that might prevent a person from forming face-to-face relationships. Such examples include facial disfigurement, a stammer, or extreme shyness of social anxiety. However, in the virtual context, these gates do not exist and so a person may be able to form relationships with people who might otherwise reject them because of these reasons.

Similarly, the social demography filter of filter theory is less likely to serve as a gate in virtual relationships. For example, the internet means people can communicate and maintain relationships over large distances, and with people outside their social class or ethnicity.

The syllabus lists two explanations of parasocial relationships: The absorption-addiction model and the attachment theory explanation.

For example, a person whose life is boring may follow a celebrity’s life in order to ‘absorb‘ some of the fun they experience. Or similarly, a person who feels unsuccessful in their own life may follow a famous person’s life and absorb the feeling of their success.

However, the person may become addicted to these vicarious feelings. When this happens, the person may need to increase the ‘dose’ in a manner similar to physical addiction in order to get the same positive feelings as before. This can lead to the irrational behaviour and delusional fantasies typical of the borderline-pathological level of parasocial relationship.