Evolution is the process by which species adapt to their environment. Over many many years, random mutations in genes that are advantageous to the animal become more widespread among the species.

In the case of food, evolution would mean genes that help humans identify and eat healthy, safe, and nutritious food will become more common. If you had genes that resulted in a preference for nutritious and commonly-found foods, for example, you would be less likely to starve and more likely to remain healthy and pass on those genes. In contrast, if you had genes that meant you really liked the taste of deadly mushrooms, you probably wouldn’t live long enough to reproduce and pass on those genes. 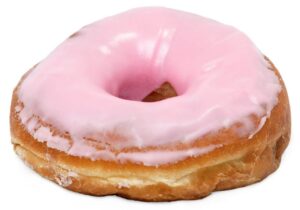 Evolution can explain human preferences for different foods. For example, sweet foods are often high in energy, which can also be stored as fat to reduce the chance of starvation. In contrast, poisons often have a bitter taste, which may explain why humans generally prefer sweet foods to bitter ones – it’s genetic.

Neophobia is an innate dislike of foods we haven’t tried before. This makes sense from an evolutionary perspective as unfamiliar foods could potentially be poisonous or unhealthy. You’re more likely to survive if you stick with familiar foods as you already know they’re safe.

We overcome neophobia via learning. In a study of young children, Birch et al (1987) found that preference for new foods increased over time with repeated exposure to those foods.

Taste aversion is when a person develops a dislike for a certain food after becoming ill from it. For example, you eat yoghurt, get food poisoning, and from then on even the thought of eating yoghurt again makes you feel sick.

Although kind of like classical conditioning, taste aversion doesn’t work in quite the same way because the time between eating the food and getting ill is often quite long. Instead, the more accurate description is biological preparedness (Seligman (1971)), which is the idea that humans are biologically hard-wired to learn certain kinds of associations very easily. This would make sense from an evolutionary perspective: If certain foods are dangerous, it would be advantageous to learn this as quickly as possible because the next time you eat that food you might get ill again or die.

The role of learning

In addition to genetic/evolutionary factors, humans also learn food preferences from social influences and their culture. 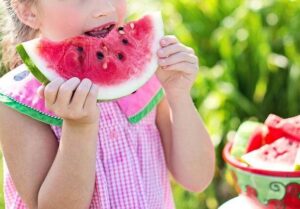 Secondly, social learning affects food preferences. Children observe what parents and other role models eat, which they then imitate. This helps reduce neophobia, encouraging the child to eat a wider range of foods.

Thirdly, operant conditioning also contributes to food preferences. If you enjoy eating a certain food, then that enjoyment serves as positive reinforcement, which increases the chances of you eating it again. However, research suggests that operant conditioning doesn’t really work to create food preferences. For example, if parents try to teach their children to like certain foods (e.g. vegetables) through rewards (e.g. praise for eating vegetables), it may actually decrease preference for those foods.

Neural and hormonal mechanisms control eating behaviour biologically, making you feel hungry or full. The main neural mechanism is activity in the hypothalamus region of the brain, and the main hormones responsible for hunger and satiety are ghrelin and leptin.

The hypothalamus is the main section of the brain responsible for maintaining homeostasis (i.e. stability and normal functioning) within the body. It controls things like body temperature, sleep, and hunger.

In the case of hunger, there are two sections of the hypothalamus that have opposite effects:

Ghrelin is a hormone that makes you feel hungry. It is secreted by the stomach into the bloodstream, which is detected by the hypothalamus, creating the sensation of hunger. When you eat food, the stomach stops releasing ghrelin, which stops you feeling hungry. After the meal is eaten, ghrelin levels (and hunger) progressively increase until the next time you eat.

Leptin is a hormone that makes you feel full. It is secreted by fat cells into the bloodstream, which signals to the hypothalamus that energy storage (fat deposits) is high and so you don’t need to eat. If you don’t eat for a while, the body uses these fat deposits for energy, and so those fat cells no longer exist to produce leptin. This reduction in leptin makes you feel hungry. 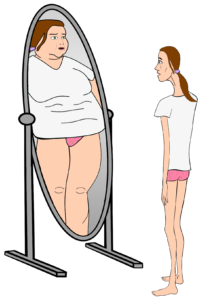 Anorexia nervosa is an eating disorder characterised by an obsession with losing weight, body image distortion, restriction of food consumption, and low bodyweight. Estimates vary, but anorexia affects roughly 1% of the population, of which 85% are female.

The syllabus looks at biological and psychological explanations of anorexia.

Biological explanations of anorexia look at the role of genetics and neural factors (such as brain structures and neurotransmitter activity).

The genetic explanation of anorexia looks at hereditary factors – i.e. genes inherited from parents – that contribute to the development of anorexia.

Despite variations in estimates, the fact that identical twins are more likely to both suffer from anorexia than non-identical twins suggests there is a genetic component to the disorder.

The role of genetics is further supported by gene association studies (e.g. Wang et al (2011) and Scott-Van Zeeland et al (2014)), which compare DNA profiles of anorexia sufferers with non-anorexic controls. These studies have found various genes to be correlated with anorexia, such as OPRD1, HTR1D, and EPHX2.

Neural explanations of anorexia look at differences in the brain structures and neurochemistry of people with anorexia.

Some research suggests that people with anorexia have reduced blood flow in the lateral hypothalamus (the part of the brain associated with hunger), but it is unclear whether this is a cause or an effect of anorexia. More recently, researchers (e.g. Nunn et al (2011)) have proposed that damage to the insula cortex of the brain is a key cause of anorexia.

In addition to physical brain structures, neural explanations of anorexia also focus on the role of neurotransmitters. For example, several studies have found correlations between serotonin activity and anorexia, although the exact relationship is unclear. One hypothesis proposed by Kaye et al (2009) is that anorexic patients naturally have elevated serotonin activity, which causes them anxiety. Starvation reduces serotonin levels (food is needed to produce serotonin), which reduces this anxiety and reinforces anorexic behaviour. Research (e.g. Bailer et al (2013)) also suggests over-production of the neurotransmitter dopamine may contribute to anorexia.

This dysfunctional family style can contribute to anorexia in various ways. For example, becoming anorexic may be a way to reduce conflict by distracting the family members from other problems. For example, a child who fears their parents will split up due to constant arguing may become anorexic in order to shift the parents’ attention away from those arguments, keeping the family together.

A related explanation (e.g. Bruch (1978)) is that anorexia is a way for people to assert autonomy and control. For example, refusing to eat might be a way for a family member to assert their individuality and free will against their overprotective and enmeshed family.

According to social learning theory, people imitate the behaviours of role models they identify with. These behaviours may be enforced vicariously, i.e. by seeing the role model be praised and rewarded for that behaviour. This can be applied to anorexia:

The syllabus mentions social learning theory specifically, but other learning approaches (operant conditioning) may also reinforce anorexic behaviour. For example, when the anorexic patient starts imitating the behaviour herself, she may receive compliments for being slim (positive reinforcement) or people may stop criticising her for being overweight (negative reinforcement). 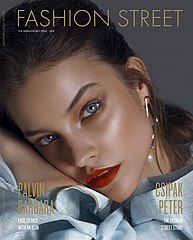 The media plays an important part in social learning explanations of anorexia. For example, singers, actresses, and models in magazines and social media are often depicted as slim, and slimness is depicted as desirable – especially in Western cultures. The praise these role models receive in the media provides further vicarious reinforcement of losing weight, which may lead to anorexia.

Obesity is a physical condition characterised by excess body fat, which may cause other health problems such as heart disease and diabetes. It is a leading cause of preventable death in many countries, including the UK. In the UK, around 30% of the population is classified as obese.

The syllabus looks at biological and psychological explanations of obesity.

Biological explanations of obesity look at the role of genetics and neural factors (such as brain structures and neurotransmitter activity).

The genetic explanation of obesity looks at hereditary factors – i.e. genes inherited from mother and father – that make someone more or less likely to become obese.

Again, as always, family and twin studies are a useful way to work out the influence of genetics on obesity. Some examples include:

In addition to these family studies, genome association studies compare the genetic profiles of obese individuals with non-obese controls to identify genes that may contribute to obesity. For example, several studies (e.g. Fall and Ingelsson (2012), Frayling et al (2007), and Hinney et al (2007)) have found the FTO gene to be correlated with obesity. However, there is no single obesity gene – many genes appear to combine to increase or decrease a person’s risk for obesity. 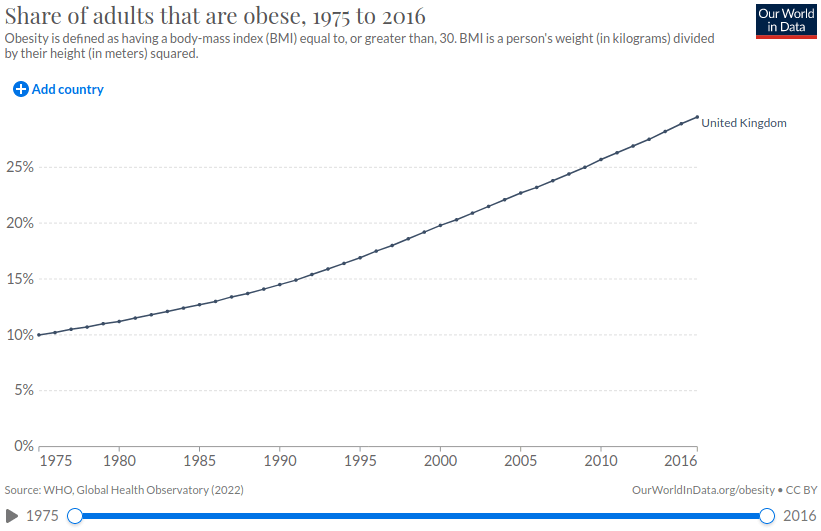 Neural explanations of obesity focus on the neural mechanisms that control eating behaviour as well as the role of neurotransmitters such as serotonin and dopamine.

As described above, the hypothalamus plays a key role in eating behaviour. Some neural explanations say that damage to the ventromedial hypothalamus – the area of the brain responsible for making you feel full – can cause obesity. Other explanations look at the role of leptin – the hormone that makes you feel full – saying that obesity can be caused by neurons that don’t respond properly to this hormone.

Neurotransmitters are also implicated in obesity. For example, Wang et al (2001) and Volkow et al (2008) have used brain scans to measure dopamine receptor activity in obese individuals and controls, with both studies finding that obese individuals have reduced dopamine receptor activity. Dopamine is associated with pleasure and reward and so the associated hypothesis is that obese people overeat to get the same pleasure and reward response as a non-obese person would get from eating less food. This is a similar mechanism to other addictions, such as smoking or drugs.

Herman and Polivy (1984) proposed the boundary model. According to this model, people have biologically-set boundaries of food intake. If food falls below a certain minimum level, the person feels the aversive (unpleasant) feeling of hunger that motivates them to eat. At the other end, eating too much food exceeds the maximum level, which causes the aversive feeling of being too full. These levels are primarily determined by biology.

According to restraint theory, trying to eat less can paradoxically make a person eat more and become obese.

One explanation of this is as follows:

Explanations of the success/failure of dieting

A diet is successful if the dieter loses the desired amount of weight and keeps it off for the long-term. There are many factors that contribute to the success or failure of dieting.

Factors that increase the chance of success include:

Factors that increase the chance of failure include:

In addition to these psychological factors, other factors (e.g. genetics) affect the success or failure of dieting.

AO3 evaluation points: Explanations of the success/failure of dieting